St John’s was built in 1872 and has been a landmark and a spiritual focus for generations of local families in the central Adelaide Hills. 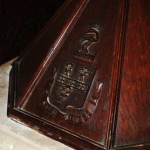 St. John’s became the Vice Regal chapel following the building of Marble Hill, with many South Australian Governors attending the church when in residence.

Many of the church furnishings, such as the carved wooden lectern, were gifts from the Governors and their wives.

The carved head at the front of the entrance porch is an image of John Baker whose family donated the land, portion of their property “Morialta Station”, on which St John’s church is built.

He was the second Premier of South Australia, succeeding Boyle Finniss; however, he only held office for 12 days from 21 August to 1 September 1857 before being succeeded by the third Premier of the colony, Robert Torrens.